They say that imitation is the most sincere of flattery. Well, not when it comes to imitating another’s culture. In recent years, cultural appropriation has become a trending topic and for good reason. However, very few people actually understand what exactly is culture appropriation and why some people find it so offensive. It’s time for […]

END_OF_DOCUMENT_TOKEN_TO_BE_REPLACED

Collard Greens and Kale; both leafy greens with almost the same nutritional value. However, why is one viewed as a health food and the other not. The answer runs deeper than just the greens themselves. A matter of fact, the answer has to do with both race and class relations.

END_OF_DOCUMENT_TOKEN_TO_BE_REPLACED

By: Megan Kelly, Sarah Mullarkey, Viveca Ortiz-Torres, Anne Arthur Sysomos Search: Latest Activity: Procter & Gamble stated that it would not be removing Tide Pods from shelves after a Twitter account, not associated with Tide, tweeted that Tide would be removing Tide Pods from shelves starting February 1st. According to the latest activity, “tide pod” […]

END_OF_DOCUMENT_TOKEN_TO_BE_REPLACED

Before the Film’s premiere, the most retweeted tweet was the reaction of the students at Ron Clark Academy when they found out they were going to see #BlackPanther. These students just found out they’re all going to see #BlackPanther and they snapped. 😂 pic.twitter.com/h6j6H2dHnl — Philip Lewis (@Phil_Lewis_) February 2, 2018 This excitement can be […]

END_OF_DOCUMENT_TOKEN_TO_BE_REPLACED

(after Ellen DeGeneres, of course) We chose to analyze tweets about the “Selfie Kid” during the Super Bowl from February 1st-8th. Our search boolean was “selfie kid” AND “super bowl.” By utilizing Sysomos and the Twitter widgets “Latest Activity”, “Geography”, “Word Cloud” and “Buzzgraph”, we came to interesting conclusions about social media activity pertaining to […]

END_OF_DOCUMENT_TOKEN_TO_BE_REPLACED

On February 4, 2018 Kylie Jenner dropped a bombshell: she had a baby, and had hid her pregnancy for 9 months. Over the course of four days Kylie and her daughter, Stormi, were trending almost daily and a boolean search using “Kylie” OR “Stormi” returned 5.6 million mentions on Twitter. Kylie may have been able […]

END_OF_DOCUMENT_TOKEN_TO_BE_REPLACED

Recently, Kylie Jenner has shocked her fans with the reveal of her hidden pregnancy. Following the birth of her child, Stormi, Jenner released an announcement Youtube video. Kylie’s pregnancy was almost instantly trending on Twitter following the announcement. ♥️ pic.twitter.com/CgiQFcRfHU — Kylie Jenner (@KylieJenner) February 4, 2018 here’s a little glimpse of the last 9 months.. ♥️ […]

END_OF_DOCUMENT_TOKEN_TO_BE_REPLACED

Kylie Jenner and her beau, Travis Scott, have been making headlines. Kylie made a big splash on Twitter by announcing the birth of her daughter, Stormi, on one of the biggest day of media consumption in America, The Super Bowl. ♥️ pic.twitter.com/CgiQFcRfHU — Kylie Jenner (@KylieJenner) February 4, 2018 Our Boolean search included the terms […]

END_OF_DOCUMENT_TOKEN_TO_BE_REPLACED

From 2/1/2018 to 2/8/2018, we ran the following boolean search through Sysomos: #SuperBowl AND/OR #superbowl AND NOT (super bowl OR Super Bowl). We looked at a global audience. The Super Bowl is one of the most viewed televised events of the year, therefore we decided it would be interesting to analyze the vast amount of […]

END_OF_DOCUMENT_TOKEN_TO_BE_REPLACED

By using the Sysomos Analytics Platform, we created a Boolean Search analyzing the controversy surrounding “Lady Doritos.” Following a Doritos commercial aired during the Super Bowl, consumers reacted negatively to a comment made by PepsiCO CEO, Indra Nooyi  in a “Freakonomics Radio” podcast interview. “As you watch a lot of the young guys eat the chips… they love their Doritos, and they lick their fingers with great glee … Women, I think, would love to do the same, but they don’t. They don’t like to crunch too loudly in public.” The Twitter widgets: latest activity, geography, word cloud and buzzgraph, were used to analyze the search term “lady dorito” OR “#ladydorito.” The latest activity graph for the range of 2/1/18- 2/8/18 showed a clear spike on the day after the Super Bowl, Monday February 5th, and subsided on Wednesday, February 8th.

@CarolineSiede created a thread defending Nooyi’s comments, which became most retweeted tweet for this topic.

Hi. No one is making a “Lady Dorito.” Freakonimics interviewed Pepsi CEO Indra Nooyi —one of the few women to run such a massive company—and specifically asked how her company approaches male and female consumers. https://t.co/D4fBGH2cYv pic.twitter.com/EBPmdDa0hz

The geography filter showed how this topic trended globally; the majority of the Twitter conversation occurred in the United States with 73.5%, followed by Canada and the United Kingdom. 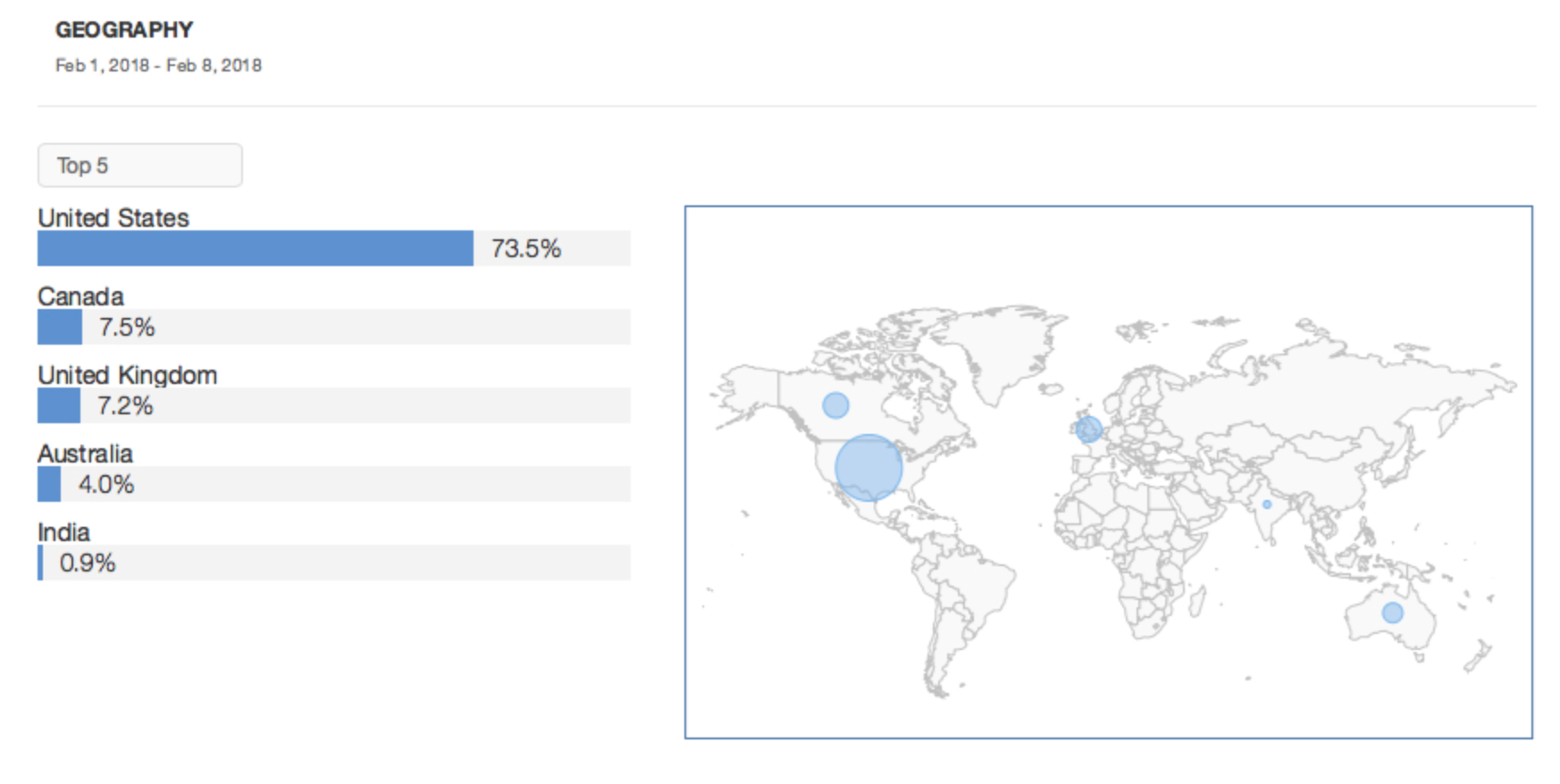 We inferred connections between words within the buzzgraph to better understand the controversy of Nooyi’s comment.Since our Boolean search used the two words “lady dorito” they appeared in the center of the graph, with related words surrounding them. The buzz graph showed the term ‘freakonomics interviewed’ outside of the graph indicating the main cluster of words were all words discussed in podcast interview mentioned. 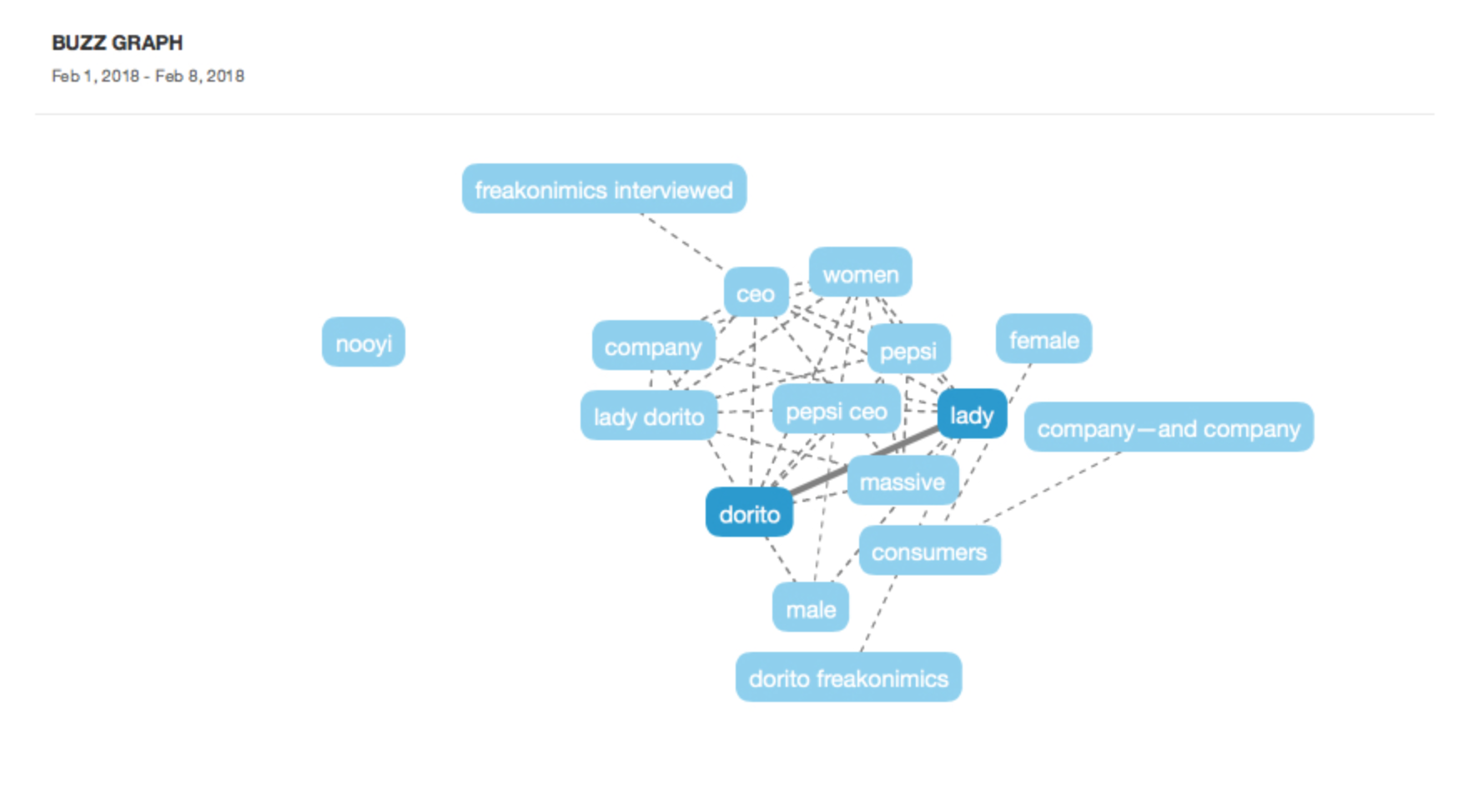 The Sysomos system allowed us to clearly define the root of this controversy and see the way that consumers reacted.