Skip to content
Posted on May 2, 2020 by Christina Gelato

When I first started this course my plan was to create a new Twitter account to keep my personal and professional life separate. I quickly found out that I wanted my professional brand to have my personal flair and stuck with my old account I made in June 2011 (yes I was under the allow age but Twitter never needs to know).

I began with 452 followers at the start of the semester and by the end, I had a grand total of 451! This means my follower count decreased by 0.22%.

So, what did I do wrong? When first entering the Twitter world I was never expecting to have a large following; I cared more about creating content myself and others enjoyed. This idea translated into this course. Gaining a large number of followers was not a priority for me, I stuck with the content instead and this obviously reflected in my outcome.

A lot of the people who follow me are people I know in real life, with the occasional Jimmy Kimmel stan account. As a result, I tailored my tweets more towards the content those who know me would enjoy. These were tweets about local events and news, and those Jimmy Kimmel stan accounts had no clue about the context. I definitely hurt myself by localizing my tweets, when I should have been aiming for a more broad audience.

I know I gained some followers over the course of the semester, but I also lost some. Twitter analytics shows the rocky road my follower count is on. 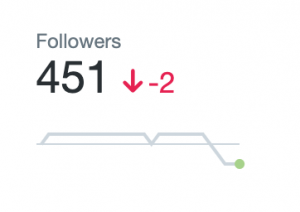 At one point I did reach 453 followers but over the last 28 days, I lost them. This could be a result of me unfollowing someone who was a mutual (users who follow each other) and as a result, they unfollowed me, someone was banned/ deleted their account, or they could have simply not liked my content and unfollowed me.

The only point I remember gaining followers is when someone I knew from real life found my Twitter through a mutual friend.

I do believe I did not put as much work into engaging with Twitter users as I did with my content and this was my ultimate downfall with retention and growth.

My tweets received a wide variety of interactions, some with a lot of attention and some with none.

The tweet which received the most impressions was a response to Syracuse University’s Twitter account who announced the closure of the Florence abroad program for the semester as a result of coronavirus.

I couldn't imagine what these students are going through, my semester abroad was the most incredible experience ever. #NHsmc

According to Twitter Analytics, this tweet received 894 impressions, but not a single person replied, liked, or retweeted the tweet. Obviously Twitter holds impressions to a higher standard than engagements which was only 18 (a 2.0% rate). I am impressed with how many people saw this tweet but I believe it is because I tweeted at a larger account who was sharing breaking news. Users were more likely to read the responses for this kind of content. I also believe using my personal story to empathize with these students helped receive some attention in the algorithm.

The next tweet received the most engagements at 137, for a 17.7% engagement rate.

The impression on this tweet is 772, showing this did reach quite a large audience as well. But this tweet received 1 retweet and 9 likes. I utilized the gallery system on Twitter to post multiple pictures in the same tweet. Because of the colors they aesthetically go well together, which I believe is partly why it gained a lot of attention. Also, clicking on the photo itself counts as engagement. I also used the hashtag #ILoveMySchool and tagged Syracuse University promoting people to click on both of these things to see related tweets. I was scared to use a lot of hashtags at first but I learned that it did prompt a lot of attention.

My next highest engagement and impressions utilized a classic approach: dogs.

This is Winston. Please invite him to your next luau themed party. He is dressed for the occasion. 13/10 #NHsmc #Voice pic.twitter.com/sZP5qaR4Nv

This tweet received 558 impressions and 92 engagements with an engagement rate of 16.5%. I used the WeRateDogs style of tweeting in order to mimic that specific voice, and show off my cute puppy. I cloned the voice well, but with what I know now I wish I tagged the real WeRateDogs Twitter account in order to get some more attention. I think this could have raised the impression number.

Ever wonder how a basic white girl who went abroad and is in a sorority lives her life? Well wonder no more follow my insta #NHsmc pic.twitter.com/ir36L6NUvV

The engagement rate for this tweet was 19.4% (impression rate of 427 and an engagement rate of 83). This is a better percentage than some of my other tweets, which I find impressive. There were no retweets but there was one like. While I believe the screenshot is helpful when minimized on a desktop the photo becomes oddly cropped. No one followed my Instagram because of this tweet. In this course, I learned a lot about how users act on social media and it would have been more beneficial to link my Instagram for easy access if they were actually interested in following my Instagram.

This is a thread I thought was going to gain more attention than it actually did.

Again I used the classic dog approach to Twitter, but this time I tagged an immediate account and used two relating hashtags. I was hoping for interaction with either the Puppy Bowl account or the Animal Planet account, but I came up short. This tweet still had 368 impressions, 25 engagements, and a 6.8% engagement rate. In my opinion, I followed a quality formula to have a tweet receive a lot of attention, but sometimes the internet just falls short because of its unpredictableness.

Because I used a program native to Twitter I believe this tweet did better because of it. On a normal day, no one would care about my sweatshirts, but this tweet raked in 348 impressions, 28 engagements, 8.0% engagement rate, and 4 likes. From what I learned in this course, social media sites tend to promote their own products in their algorithm. This is a low-quality video that does not have much content, but Twitter still decided to promote it.

This tweet had 6 likes, 285 impressions, 13 engagements, and an engagement rate of 4.6%. I specifically used all lower case text in this tweet because I knew it would resonate with a certain audience, and it did. This was a well-executed tweet, but because I have a smaller audience and this tweet was nothing original it did not go viral.

I can't believe I never knew about this until now how is this even legal #FreeBritney #NHsmc https://t.co/KJJHSh7Lzm

I looked into a trending topic to find out new information about a celebrity. I was shocked by what I found and responded. The impressions for this tweet were 350, engagements 3, and engagement rate of 0.9%. The impressions were rather high on this because I used a trending hashtag, and quoted someone else’s tweet. The engagements were low but I did get my handle out on Twitter in a place where my tweets normally do not reach.

This next tweet is not one of my best, but it did okay.

The tweet gained 271 impressions, 15 engagements, a 5.5% engagement rate, and 5 likes. This tweet featured a typo that I did not pay attention to until after it was posted. It was not worth it to delete the tweet considering it already received a decent amount of attention. I again used all lower case to reach that same audience. I used TweetDeck to schedule this tweet, and wish I took more time to use The Bachelor hashtag or tweet at other notable Bachelor franchise characters.

My next tweet used Google Trends to make a point.

This tweet received 1 like, 243 impressions, 24 engagements, and a 9.9% engagement rate. I tried to keep the tweet funny, but I believe this tweet struggled because people were scared off by the graph. Someone scrolling through Twitter may have thought this was a science, math, or political tweet that just did not pertain to them and they scrolled by without engaging. I chose to tag the New Jersey Government account because they have been known for having a relatively funny account and I was hoping for a response from them but I did not receive it.

Overall, I think I stuck to a pretty consistent voice throughout my Twitter but I tried to dabble in new forms of communication. I did not realize how little attention I paid to my followers, and how that is something I need to focus on more. I saw my most successful tweets when I used hashtags, tweeted at other accounts, or quote tweeted/ responded. I plan to do this for the future because these are some of the steps that will lead to an increase in followers, and I want to improve my influence on social media.