Before COM 427, I had never had a Twitter account. Creating an account on an unfamiliar app was a nerve-wracking experience at first; however, I grew to love Twitter and will continue to use it after the semester. At the beginning of the semester, I started my Twitter account @FodimanSydney with 0 followers. Right now, […]

END_OF_DOCUMENT_TOKEN_TO_BE_REPLACED

In regards to the recent controversy, Hollywood executive pitching that Julia Roberts should have played Harriet Tubman in a movie, people did not respond well. On Twitter, many expressed their opinion regarding this issue. There were two different takes on how people decided to respond: take offense or make a joke out of it.  Some people simply laughed at the ridiculous pitch, while others expressed that they were absolutely appalled by this.

Under the #JuliaRoberts, some people cracked jokes such as putting her face on the 20 dollar bill. 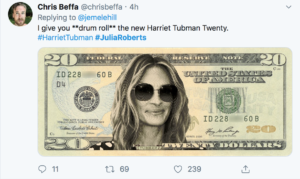 Again, a man joked about the matter, suggesting the controversy as a “game”. 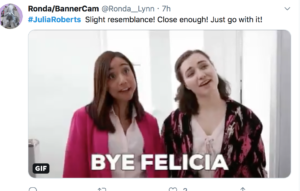 Most of the responses, however, showed that they did not take this as a laughing matter. People expressed that they feel this is racist and touched on the underrepresentation of African American women in Hollywood. 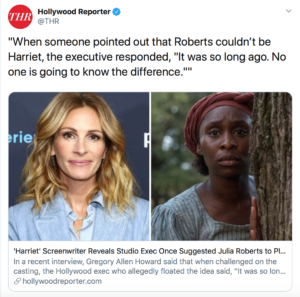 People find this to be so upsetting that a Hollywood executive would suggest this. There are so many powerful, and talented African American actresses out there that could represent their ancestors in a way that Julia Robert’s couldn’t. Poor Julia for getting dragged into this!

END_OF_DOCUMENT_TOKEN_TO_BE_REPLACED

Objective: The objective of this campaign is to reach 500+ views on the meme posted on imgr.com. Inspiration: I always find the best memes to be the ones that make fun of yourself. Memes speak about human truth, and to be able to laugh at yourself and admit we are all human and not perfect is […]

END_OF_DOCUMENT_TOKEN_TO_BE_REPLACED

Everything you want to know about Justin Bieber, and Dan + Shay’s romantic new song “10,000 Hours”.

END_OF_DOCUMENT_TOKEN_TO_BE_REPLACED

My mother sent Instagram’s “viral hoax” in my families group chat in fear of what will happen with the content on our Instagram accounts. She sent us the photo that explained that “tomorrow starts the new Instagram rule where they can use your photos.” My mom even re-posted it herself, until my siblings and I […]