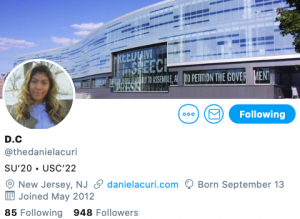 Before taking the Social Media for Communicators course, I did not think about updating my Twitter account. For many years, my Twitter account was for personal use, until I was midway through college. While I did change my retweeted content to be more entertainment and digital media-based, I did not implement any other social media techniques that could have benefited me more than I imagined.

Using Twitter Analytics, I learned that before the course my tweet impressions were roughly between 1,000 to 2,000. From September to November of 2019, I lost 7 followers and did not gain any new ones. In total, I had 930 followers.

Now that I have completed my course, my twitter account has gained 17 new followers. With 947 followers, there was a 1.83 percent increase.

As I analyzed my Twitter’s performance from the past three months, I realized that some of the strategies taught from the course helped grow my Twitter following, as well as my tweet impressions and engagement. Using images and hashtags, tweets during live events, and digital networking all played a major role in my Twitter performance. What did not work was using only one hashtag in my tweets. The tweets with only one hashtag did not perform as well compared to tweets with more than one hashtag.

To further understand how my Twitter performance improved over the semester, I have gathered my top ten tweets, from January to March, that best reflects the techniques that enhanced my overall Twitter engagement.

One of the main points that Professor Grygiel mentioned when wanting to work in an industry of your choice is to digital network with professionals. I want to pursue a career in the entertainment industry, specifically in the digital sector. My dream job is to work for MTV, therefore, I decided to reach out to Kaitlyn, who handles MTV’s social media presence.

In the tweet itself, I decided to keep it brief while still telling her that I liked her pop culture social media presence. I made sure to not start off the tweet with her @ name, or else the tweet would turn into a reply tweet. I also inserted the MTV Twitter account for a better chance of engagement.

With some emojis, the tweet earned likes from Kaitlyn and the MTV account. Recognition from both accounts led to high impression rates since users can see ‘like’ tweets on their timeline.

I decided to tap into the meme culture. If I used the professor’s advised technique of using images, then there could be more engagement.

By choosing an image meme that has great visualization for users to easily see and interpret on their timeline without having to open the image, I made sure that my copy was casual and more of a reaction to the meme. Since the meme involved Target, I also wrote the company’s Twitter name.

My extra focus on how the image was seen by my followers online led to earning over 200 impressions and 21 total engagements. The easier a tweet is readable for users, the more engagement there will be towards the content.

A technique that became the major reason for my improved Twitter performance was the act of tweeting during live events, with the mix of trending hashtags.

The Oscars were getting much buzz on Twitter, so I decided to live-tweet during the show. I knew people were going to see my tweet if I used trending hashtags related to the show, but I needed to figure out how my tweet could stand out from the rest.

Therefore, I decided to use a GIF of the Parasite team backstage that was not seen on television and wrote about it. The director of the movie was romantically engaging with the Oscars that Parasite won. I decided to respond to his gesture and pretty much publicly adored his action. I made sure to use the trending hashtags, #Parasite, and #Oscars, which in return, helped earn my tweet receive almost 250 impressions. Furthermore, the GIF received almost 30 media views.

From seeing how well my tweet did when I live-tweeted during a trending event on Twitter, I continued this technique with the Superbowl. I knew my followers were more into pop culture and not into sports, so I decided to live-tweet about the Puppy Bowl.

I took a different approach and quoted a tweet by the verified Animal Planet Twitter account. They tweeted a GIF of puppies during the Puppy Bowl. I used the trending hashtag #PuppyBowl and emojis to show emotion in my tweet. In return, my quoted tweet led to over 258 impressions.

One of my favorite moments from the #Oscars red carpet! @RealChalamet #MargotRobbie #ICYMI #NHsmc https://t.co/BFuLF4wg9M

Events such as the Oscar still get buzz even after the day of the event. The next few days after the show, people were reflecting back on what they noticed and what they missed. There was a trend on Twitter about actor Timothee Chalamet photo bombing Margot Robbie. I decided to use this opportunity and add it to the conversation.

Once again, I quote tweeted a verified account called Chicks in the Office that tweeted a short video clip of the encounter between the two actors. Unlike my previous tweets about the Oscars, I decided to mention the two actors but in hashtag form, while also include #Oscars. My Oscar reflection tweet ended up earning 281 impressions, which is more than my tweet received on the day of the Oscars. These results indicate that as long as there is viral potential, it doesn’t matter how long ago the event took place.

The Bachelor is always buzzing on Twitter. I decided to live-tweet during the show and use my own photo while making sure that it could be viewed without having to click on the tweet and easily interpreted. I also decided to try and not use hashtags as an experiment. Instead, I made sure to use keywords that the Bachelor audience would search up. Using ‘Bachelor’ in my tweet, I also mentioned the official Bachelor Twitter account.

It turns out, this tweet earned more engagement than other live tweet posts with trending hashtags. My image was engaged 47 times. These interesting results indicated that while hashtags are great to use, it’s important to also consider keywords in the tweet. That alone could increase much more engagement.

I decided to tweet about Eminem’s Oscar Performance. Although, I decided to focus more on keywords and hashtags and not include an image. I tweeted the Eminem Twitter handle and the hashtags, #Eminem and # Oscars. I also decided to include “Lose Yourself,” the song that he performed at the show.

The tweet earned over 500 impressions. This tweet became successful because I tweeted about an idea that many other Twitter users agreed with. If users see a tweet that relates to their thinking, then they are more likely to engage with it.

@Kaitiii Hey Kaitlyn, I really like how you manage your Twitter profile to be professional while still portraying the @MTV brand and your own! Your tweets and bio clearly gives your audience the hint that you love pop culture news! #NHsmc

I decided to improve my digital networking skills, so I went out and engaged with professionals in the industry. I reached out to Kaitlyn, who is the social media manager for MTV, and complimented on her professional social media presence.

I made sure to include her handle, as well as the MTV handle. My message was brief but straight to the point. Kaitlyn and MTV both interacted with my tweet. What’s great about their engagement is that others would be able to see my tweet. Many professionals follow MTV, so this was a great way to get myself somewhat noticed in the pop culture industry.

This quote tweet about Camilla Cabello was when I live-tweeted during the Oscars. There was a lot of praise for her performance being dedicated to her father. Very emotional and heartwarming to many Oscar viewers. Since users were emotional to this content, I decided to tweet about it. The Grammy Twitter account posted a video of Camilla’s performance, which was getting a lot of engagement.

In my quote tweet, I made sure to use #Grammys2020 and emotional emojis to convey my message. As a result, my quote tweet received over 1,000 impressions and six total engagements. I realized that including media in my tweets always received high impressions.

Hey @sarina My name is Daniela & I'm a senior studying public relations in @NewhouseSU🍊It's so cool that you are working for the @RamsNFL🏈! I'm going to L.A for a benchmark trip & was wondering if you have tips for getting your foot in the door in the industry. Thanks! #NHsmc

I decided to try digital networking more on my profile. After researching who to engage with online, I discovered Sabrina, who is Newhouse Alum and currently works for Rams Football. In order for her to respond, I needed to make sure that my tweet was brief, while still getting out my message. I made sure to introduce myself and compliment her success in the industry.

I also made sure to include the Newhouse Twitter handle for possible engagement from the school, and the Rams Football handle. Not only did she interacted with my tweet, but I received 61 profile clicks. My networking tweet influenced others to check out my profile and see that I am a student trying to get into the industry. A simple tweet saying hello and acknowledging someone’s success can get you noticed.

After analyzing my top tweets, I learned that a tweet can make or break if you don’t use the right hashtag or image. By implementing images and hashtags, tweets during live events, and digital networking, my Twitter has significantly grown over the 3-month period. It’s crucial that I continue using these techniques to make my Twitter professional and relevant to the entertainment industry.