I have seen a expansive overall follower growth on my Twitter from the start to finish of this course. In total, I have gained 36 followers. I started off with 95, and ended the semester with 131. That is a 27.46% growth rate. I attribute this growth to several things. In order to grow your social media following, I found that you must tweet frequently and consistently, optimize posting times, use visual content, utilize hashtags, and engage with replies, retweets and tags. Additionally, I found it helpful to create an inviting profile, identify followers within my network, and know my target audience. I also started including my twitter handle on my business cards and email signature, which also probably brought in a few new followers in. Similarly, I embedded my twitter feed onto my personal website. By using all of the tactics discussed above, I was able to grow my twitter presence and overall following.

Below I have attached my top 1o tweets since August 12th, a rough estimated date of the beginning of the semester. My tweets earned 13.1K impressions over this 91 day period. 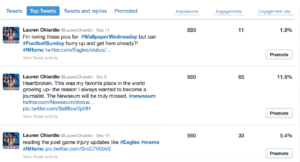 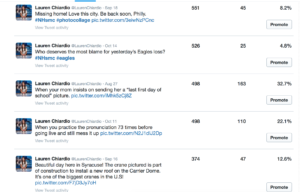 When analyzing these tweets, I noticed several things. As mentioned in part 1 of this blog post, almost all of my tops tweets included hashtags, visuals and engagement. Additionally, I targeted my audience with some of these tweets. I knew that a good portion of my Twitter following was fellow Philadelphians, so the tweets that had to do with the city itself, or the city sports teams, non ironically happened to do the best. Although I had several tweets with much higher impressions, going into the thousands, they were not as highly engaged with. Over the course of this semester, what I have learned to be most helpful, is to stop being so serious and business-like. Once I started to tweet about the things that I am actually passionate about and enjoy engaging with others about, I saw growth. For me, the thing that I am most passionate about is my hometown, the city of Philadelphia. Although I did not limit myself to tweeting solely about the city, I have gained a significant amount of notability because I tweet about what I care about, what I am passionate about, and my followers can see that. I think that has given my profile a more humanistic, personalized and welcoming appeal.