My meme was well above my views benchmark with 1,666 views as of this blog post. As for Engagement Rate, my Twitter Card received 32 clicks out of 1,347 impressions (2.38%), so I fell a bit short on this objective. 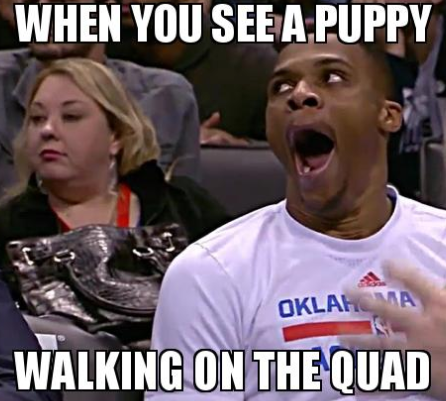 When there’s a #puppy on the quad, all bets are off https://t.co/PeZub3sYdh

My Imgur tags and Reddit posts got me most of my meme views. I had ~440 views after posting on Imgur and gained roughly 1,000 more after posting several times to Reddit. My content wasn’t particularly well-received on either site according to their upvote metrics, but I still got a lot of eyes on the meme. Better audience targeting could have led to an even higher view count if users had actually enjoyed and upvoted my meme.

My Twitter campaign seemed a little lackluster. I think that my webcard copy could have been stronger. My image was also formatted a bit strangely, so I could’ve benefitted from changing that. I would’ve liked to have seen greater engagement on my promoted tweet, but I am impressed that it was seen over 1,300 times. Though it didn’t work out well for me in terms of engagement, it’s easy to see how Twitter could be a strong and viable platform for awareness marketing.