Skip to content
Posted on March 8, 2020 by Christina Gelato

The Weeknd just announced “The After Hours Tour” via Instagram on February 20th, 2020. On his post, he included the special guests that will be joining him, which included Don Toliver, 88Glam, and Sabrina Claudio. Some people were outraged at the fact that Sabrina Claudio will be joining him, considering her past, racist remarks on an old Twitter account. After apologizing for her choice of “insensitive words” back in 2018, people are still angered that she will be joining three other African American artists on The Weeknd’s North American and European tour. People were quick to jump on the cancel culture train. The trend was also discussed in news articles on websites, such as Billboard.

In order to get more specific in our boolean search for this trend, we strayed away from using the broad/popular term of “The Weeknd”. Using “racist” “tour” and “Sabrina Claudio”, we were able to streamline very specific tweets for the trend we were looking for.

In the Buzz Graph, all of the related words were connected to the tour. Variations of her name were listed, and variations of her co-headliner’s names were also among the words listed. Additionally, the tour name was mentioned.

In the word cloud, most words relate back to the tour and the artists, like “hours,” “abel,” “don toliver,” “88glam,” “tour dates,” etc. But other words relate to her racist comments from her old Twitter account, like “racist” and “black.” Lastly, there is one random phrase “new branches” in the word cloud, which is a Twitter account that creates playlists on Apple and Spotify and keeps people updated on new music and releases. The account has almost 60K followers and the most retweeted tweet was in response to this account.

New Branches, as mentioned before, is a news source for those interested in the music industry news. So quoting their tweet as @baebaegoodnight did and calling out Sabrina Claudio gained a lot of traction among this community and industry.

this would have been good. except the sabrina claudio stench. like yall know she ran a twitter account to bully black women and was dropping the n word nonstop right? with the hard "er." apology was shit. she wasn't remorseful, she was sorry she got caught. https://t.co/iAdLpBosCR

The latest activity shows the highest spike of Twitter activity on February 20th, at 2 pm with 1,200 tweets. This was due to the release of The Weeknd’s tour and co-headliners. According to other analytics, among this time frame (Feb 15-21), Sabrina Claudio’s mentions were 78% negative. Other very small spikes in the graph were recorded on February 15th, a few days after Claudio canceled her performance at the “Garden Beats 2020” festival. It was interesting how most of the negative backlash occurred after the announcement of The Weeknd’s tour, as opposed to the cancellation of her performance at the festival. This may be because The Weeknd’s popularity in the United States garnered more attention than the festival. Many people could have been curious about her past after hearing about her headlining for The Weeknd and ended up researching, which led to the backlash of her past racist comments. 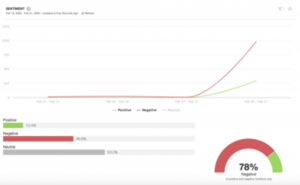 Another insight to consider is the negative backlash seen in the photo above might affect ticket sales considering that 63% of Twitter users engaging were female, and women make up the majority of ticket buyers.

In conclusion, this trend with Sabrina Claudio is a good representation of how users hop on the bandwagon when it comes to cancel culture, and how in a world where you live your life on the internet your past can follow you anywhere.