Skip to content
Posted on October 22, 2017 by Melissa Levine

The US Open, the fourth Grand Slam tennis tournament of the year, took place from August 28th to September 10th, 2017. This is the only Grand Slam tournament that takes place in the United States. People from all over the country and the world come together to watch and discuss this celebrated event.

The US Open was discussed frequently between September 1st and September 15th. On September 1st, there were 106.2K tweets. The graph reveals the chatter hit a peak of 296.8K tweets on September 10th, the day of the Men’s championship. There was then a significant decrease in US Open buzz on Twitter, and by September 15th, the tweets dropped to 3.8K. 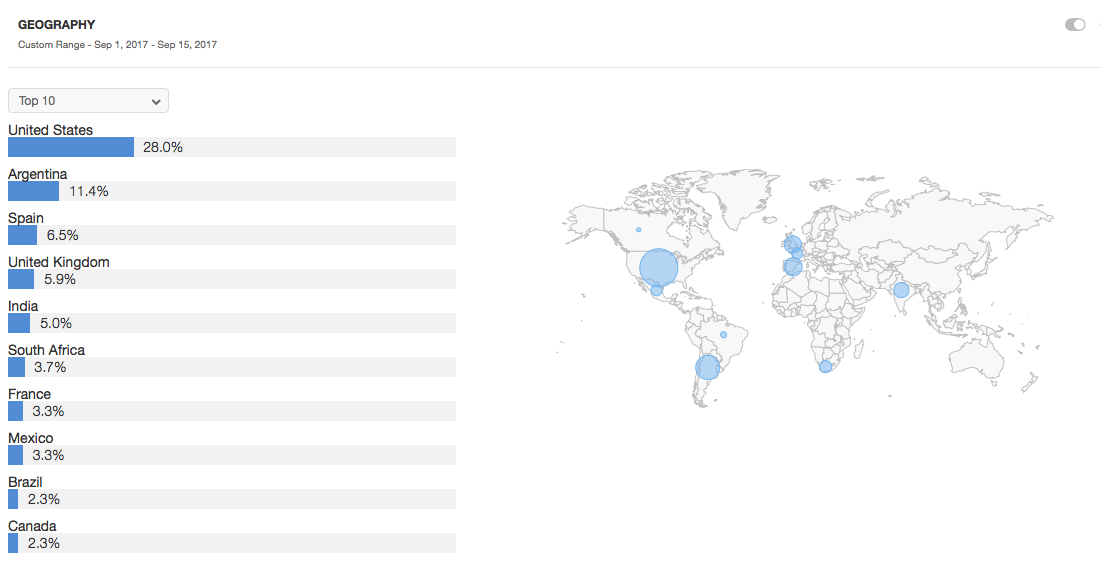 Being that this was the US Open, it is not surprising that the majority of tweets were composed by people in the United States. The Twitter buzz extended beyond the US; Argentina had the second largest number of US Open tweets, which can be explained regarding Argentinian semi-finalist, Del Potro. Other countries with significant tweet counts are Spain, the United Kingdom, and India.

The women’s champion, “Sloane Stephens,” is the most commonly used word. In addition, the word cloud also emphasizes Rafael Nadal, men’s champion. The most frequently used words circulate around the championship. Other important phrases mentioned are “black women” and “american woman.” This shows viewer’s excitement around Sloane Stephen.

#usopen has the strongest connection to @usopen, indicated by the bolded line connecting them. #usopen is the connector to all other words in the Buzz Graph. The Buzz Graph reflects the Word Cloud, as Sloane Stephen and Rafael Nadal are also mentioned.

I'm laughing so hard at this photo of Sloane Stephens seeing her #USOpen check for $3.7 million pic.twitter.com/CyYzL9yM1L

The most retweeted tweet was composed by Michael Katz, social media editor for SB Nation. He received 9,379 retweets from his tweet on September 9th. This tweet’s success is rooted in its comedic nature and relevance to the US Open. Sloane’s reaction to the check was very relatable and genuine, helping the tweet gain recognition.

One thought on “Serving You Some #USOpen Analytics”