Skip to content
Posted on November 25, 2019 by Sean McKenna

What better image to pair meme text with than a SpongeBob image?  Upon searching the internet to find the perfect image for my viral meme, I came across a SpongeBob image with ample text possibilities.  It was then that I decided to construct a meme that would not only resonate with college students, but that would also resonate with high school students and even teachers.

The image that I have chosen shows SpongeBob carefully studying a piece of text.  SpongeBob looks both bored and confused, while also looking sly and mischievous.  In the past, the image has been paired with text about arguments with significant others, as well as text regarding feeling smart because you have glasses on.  Below is an example of a meme using this image. 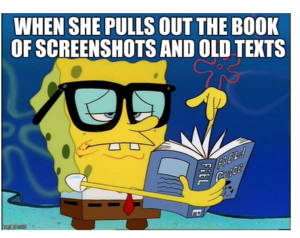 The overall object for my rendition of the above meme, was to create a viral piece of content.  I defined my objectives as the following:

After analyzing other memes with the image of my choice, I created a meme that I believe resonated with students of all ages.

In order to get my meme to go viral, I used several techniques such as Facebook and Twitter posts. My Facebook posts were more successful than my Twitter ones, but I am connected with more people on Facebook than I am on Twitter.  Ultimately, I received 607 views on Imagur, 7 points and 1 comment. Overall, I am very happy with my meme.  I met all of my objectives and ultimately surpassed them.