Skip to content
Posted on December 10, 2018 by Kayla Miller

“Which Spanish Accent is Sexiest? Celebrity Edition feat. CNCO” was the highest trending topic on the Pero Like BuzzFeed Facebook page over the past three months. When the video was originally posted, during the week of August 19th, 2018, Pero Like reached 479,101 Facebook video views; However, the trend didn’t fade out quickly. The Spanish heartthrobs continued to go viral, reaching record views for Pero Like. The trending video currently has 32M views on Facebook and is the first featured video on the the Pero Like Facebook page. Over the past three months, The Pero Like Facebook Page has had a total of 2.47M Interactions and an average of 143.3K weekly interactions.

This particular trending topic was popular on social media because of its entertaining content and because it included the latino boy band, CNCO. CNCO is a GRAMMY nominated latino boy band with a strong Hispanic following – similar to that of Pero Like. CNCO has 3.45M Facebook followers, 2.7M Instagram followers, and 853.8K Twitter followers. Their followers, also known as CNCOwners, re-posted the video on various platforms and thus increased the post’s impressions.

This trend is also versatile because it would be able to be replicated with a different band and with different accents. For an example, they could make “Which English Accent is Sexiest? Celebrity Edition feat. One Direction.” This would gain viewership of a variety of fans and generate an online conversation and engagement with viewers about which foreign bands should be featured next.

The Pero Like page is known for posting videos and articles relating to specific Hispanic music, foods, and cultural references. Their other most popular posts from the previous 3 months were “7 Types of Bachata Dancers, “22 Songs Strictly for Latinos with Old Souls and “15 Things Latina Moms Say.” 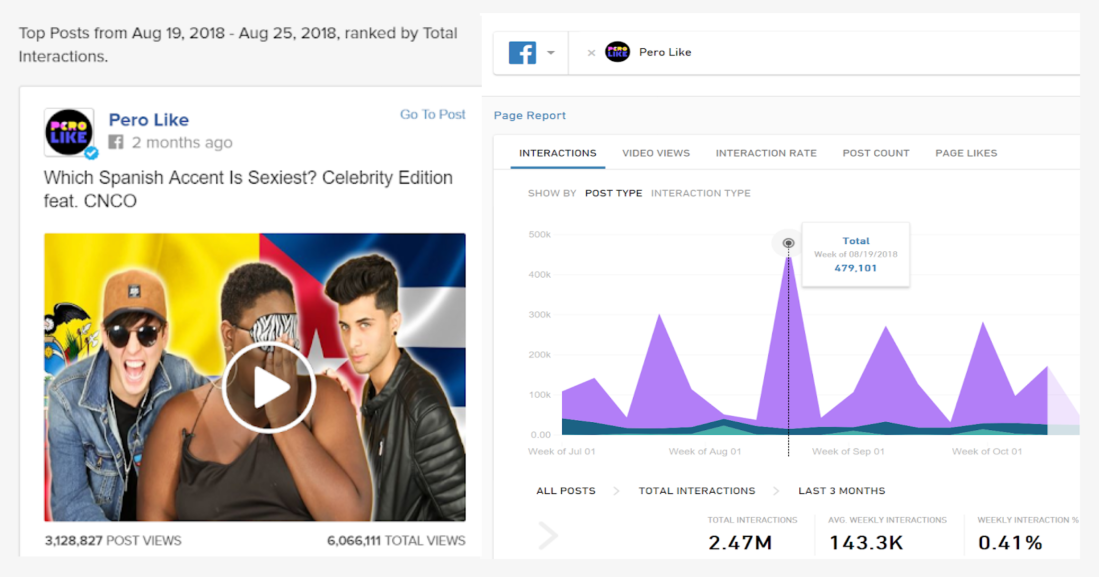