Skip to content
Posted on November 27, 2019 by Sydney Kaplan

This year, we have discussed what it means to “go viral” and how making something go viral uses a few key strategic steps that help you appeal to whatever audience you are trying to reach. I decided to create a meme in order to see what I could do to make it go viral, using what I know is currently trending in popular and social media culture along with engaging with it on different platforms to make my meme reach as far as it possibly could. I learned multiple things from this assignment, both from the successes and the mistakes made along the way.

This meme plays off the fact that often times when people try to eat healthier, they still end up missing those unhealthy foods when being around friends who don’t have the same goals as them. I know everyone has felt “order envy” before, especially when going out and eating at a restaurant with so many options, which is why I decided to make a . I decided to use the Distracted Boyfriend meme frame to play off of and make a joke about this incredibly common dilemma. I decided to use this meme frame because it is popular and trendy, as well as the fact that the content/writing within these memes are always different, leading people to actually read what the situation is in order to understand the humor. My target audience is a younger demographic who understands meme culture and typical meme frames like this, while also caring about healthy eating and promoting a healthy lifestyle. I planned on promoting this meme by tweeting at and direct messaging meme accounts with a wide variety of different types of content, while also sending this to accounts and influencers who focus of healthy eating and wellness. This meme is extremely relatable in those online communities.

An example of the original meme that inspired me: 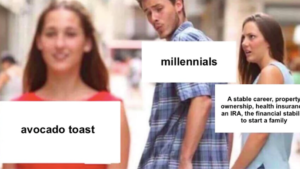 My objective that I laid out in my marketing plan went as follows: 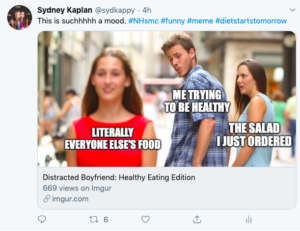 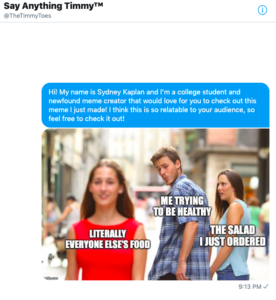 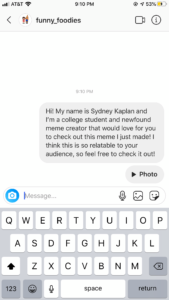 I was very excited about this project because I genuinely believed that my meme was funny and relatable so I had no problem posting it out into the world. This was my first time using Imgur, and I think this was the most successful platform for my meme. Using hashtags like #meme brought this meme to a super wide variety of audiences, while using the hashtags like #distractedboyfriend and #dietstartstomorrow led this meme to a more specific and targeted audience that appeals to them even more.

After I found that using really general hashtags worked to gain views on Imgur, so I decided to change my original caption for my tweet and make it less specific with more hashtags. I used #meme again, while also adding #funny as well (along with #dietstartstomorrow for that more specific audience.) Something else that I found to be really successful was promoting my tweet in person. I texted my tweet to multiple groups of friends and family encouraging them to share it, along with posting it in groups of organizations I am a part of. I got a lot of great responses and feedback, which made me really understand the importance of in person marketing in tandem with the online platforms.

In terms of the direct messaging on both Twitter and Instagram, I did not receive a response to on either platform. My strategy behind the accounts I messaged was to pick accounts that my meme would fit well with their content and brand, as well as choosing popular accounts with a following on the smaller side (under 5,000) so I had a higher chance of receiving a response as opposed to accounts with hundreds of thousands of followers. The account I messaged on Instagram @funny_foodies has 1,479 followers, while the account I messaged on Twitter, @thetimmytoes, has 4,514 followers. If I were to do this again, I would have picked more active accounts with potentially even more followers along with sending a follow up message to make sure the accounts actually see my meme. Something else that I could’ve done better was with the timing of my tweet and messages. If I had posted them earlier, I feel as though I would have gotten significantly more engagement.