Skip to content
Posted on December 19, 2019 by Sydney Kaplan

This semester, I grew in many different ways in the social media community. I started using Twitter for the first time since 2014, and even then I never really tweeted or looked at it. I had 22 followers on Twitter when I started this class, and I ended up with 33 followers. That is a 10.98% growth over the entire semester. There were many tactics I found that worked in promoting these tweets, and many things that did not work in helping increase my influence and network. The first strategy that I found worked was using hashtags. Using more common and widely used words that people hashtagged often brought my tweets to new accounts and people as well as made them more relatable. Another tactic that I found worked was using an additional form of media in my tweets along with the words made them more appealing, whether it was a photo, video, meme, or poll. In general, people liked to engage with my multimedia tweets more often than my tweets that were strictly words. Another strategy that I found to be helpful was to appeal to my audience. Many of my active followers are Syracuse students around my age, so when I posted about our school or something that us students all have in common, I received more engagement than on my general tweets. I discovered this tactic later in the semester, so it is a strategy I wish I could’ve used more of. On the other hand, there were definitely ways I could’ve done better in terms of how I engaged. I think I should have engaged more with other people’s tweets to show that I’m around and wanted to be part of the conversation, rather than just liking the tweet or scrolling past it. Another way I could have done better was by directly tagging more people and accounts that I was talking about or that was relevant to my tweets. I believe I should have done more of this because a large percentage of my followers were back from 2014 and are therefore inactive now, so I needed to make more of a foundation for myself with people who were active in the Twitter community.

This tweet was for sure my most successful tweet over the semester. I believe there is a variety of reasons for that. Not only was it a funny and relatable meme for a lot of my followers, but I used common hashtags like #funny, #meme, and #dietstartstomorrow. I also did a bit of self promotion for this meme, which included me telling people to check it out on Twitter as well which I definitely believe helped. This tweet got 7 likes, 273 impressions, and 15 total engagements.

Hi @billwise! As an advertising major and a Newhouse student, I am very impressed with the way Mediaocean has been branded as a company that not only has the passion to take risks, but as a company with the foundation to make those decisions worth it. #Mediaocean #nhsmc

I was really excited about this Tweet because I worked hard on my wording in order to sound professional and I directly tagged the CEO of the company I had an interest in. Not only did he respond by liking it, but he also commented! This tweet had 1 like, 396 impressions, and 15 total engagements.

I schedule my tweets in advance now…does that mean I'm famous? #NHsmc

I was excited to post this Tweet because it was my first video as well as a cute and fun video that I believe represented something I would post on social media in my day to day life. The video itself got 28 views, and the Tweet itself got 2 likes, 173 impressions and 7 total engagements.

These days, is a Polaroid just a picture to take a picture of? #NHsmc pic.twitter.com/mUXMpzZrSp

I really liked the concept of this Tweet because it had me ask a question that many different kinds of people could ponder over. Finding an example of real life social media made me reflect on our class discussions about what we really do with all these photos we are posting online, and why something like a polaroid is trendy and relevant in this day and age. This Tweet got 3 likes, 238 impressions, and 16 total engagements.

Hi @jmgrygiel! My name is Sydney Kaplan and I'm a junior advertising major. I am so excited to join this class and this network, and I can't wait to get ~social~ #NHsmc

I got specifically got kind of nervous to post this Tweet, given that it was our first one and did not know how much of social media terminology to put into the tweet given that it was for a class. I remember feeling proud of myself to including the tilde’s on each side of the word social so I was able to show a bit of my personality. This Tweet got 1 like, 230 impressions, and 5 engagements.

Proud to be a part of this student body who will stand up for what is right #nhsmc https://t.co/0vmJtIk2Jz

I tweeted this Tweet because I felt very strongly about the No tAgain SU movement and all the issues that were plaguing our campus before Thanksgiving break. I believed that reposting this video of students protesting at the Barnes Center and tweeting that I was proud to stand with them was more powerful than writing a long winded post explaining what was going on in the video itself. This tweet got 1 like, 136 impressions, and 3 engagements. Looking back now, I wished I had hashtagged the #NotAgainSU itself in order to get even more engagement. 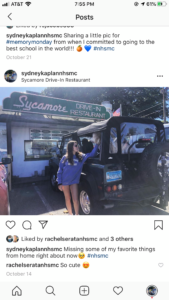 This was my first post on this Instagram account, so I think that during my following spree, when people would follow me back they liked my only post as a form of engagement and encouragement (the same way I did for others). I started with no followers on this account and I was able to get up to 16 followers, so 4 likes and 1 comment on my first post was a huge success.

I posted these pictures using a lot of different techniques, like new filters, the swipe feature, and using a popular and common hashtag. This picture gained me a new and random follower from my #latergram hashtag, as well as having appealed to more of my followers for its aesthetic of looking like something I would post on my personal Instagram account. This post received 4 likes.

This post was the first Boomerang I’ve posted on Instagram, so making sure I posted an action that would work well in its formatting was a struggle at first. I had to have my friends redo this a couple times just to make sure it would be the most visually appealing it could be. This post received 10 views, which is the most engagement I know of on this account, and 2 likes.