On September 23rd, sixteen-year-old Greta Thunberg made a speech at the UN’s Climate Action Summit in NYC that struck the nation. After her appearance, the Twittersphere exploded with comments about Greta and climate change.

The Boolean search was “Greta Thunberg” AND “Climate Change” AND NOT “Donald Trump.” Because there was a famous photo that spread quickly after the Summit of Thunberg glaring at Trump (was used for a lot of memes), we wanted to see mentions that were independent of the President. The goal was to find substantive views on Thunberg’s speech and activism.

The largest spikes in twitter activity were in the afternoon on September 23rd, the day Thunberg gave her speech, and on the morning of September 24th, the day after. This is likely when most twitter users would have seen news coverage of the speech and allowed time for everyone online to react and comment, including the following day. The activity then steadily declined as the week moved forward onto different stories. 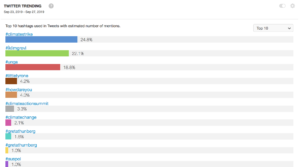 Greta herself did not trend as much as subjects related to her, like climate change. This is likely because while Greta’s speech was a major part of the day, the United Nations was assembled as a whole to address climate change on September 23rd, coming off the back of climate strikes worldwide over that weekend. Also interesting is that a memorable part of Greta’s speech – where she says #howdareyou to world leaders – trended higher than #gretathunberg.

The Buzzgraph and Wordcloud above shows the relationships and frequency of words that were used in tweets about Greta Thunberg and climate change. By looking at these graphs, we can see that there is a strong correlation between Greta’s name and terms that have to do with climate change and social activism. 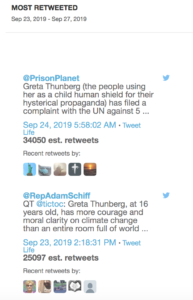 The highest retweeted tweet was from a user by the name of @PrisonPlanet. The interesting thing about this account being the most retweeted is that it seems to be very anti-climate change activism. The tweet by @PrisonPlanet suggests that Greta is a nothing but a propaganda symbol being used by climate change activists because of her age/appeal. The second most retweeted tweet is from U.S. Congressman Adam Schiff, a Democrat, who supports Greta. Note that @PrisonPlanet’s tweet gets just under 1,000 more retweets than Schiff. 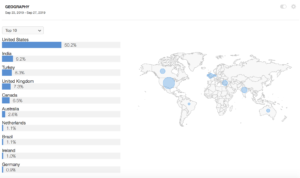 The country that tweeted about Greta and climate change the most was (as shown by this graph) the United States. Although this could solely be due to America’s population being much larger than the other countries shown, the U.S. also generates a lot of news and controversy about the issue of climate change.