To all my #Syracuse people, my band is playing @WestcottTheater TONIGHT. Put your dancin' shoes on and boogie on down. #NHsmtp

This Tweet was successful since it catered to both my family and friends as well as Syracuse locals.  The likes on the post are from Jon Kane and my sister, so the reach of engagement is possibly not huge.

There are many blogs popping up to cover #livemusic, but credit to @jambase for providing quality content in a land of click-bait

This Tweet is very specifically targeted both at one of my favorite news sources for live music, as well as certain followers I have or are within the same communities of live music.  In the summer of 2013, I interned for Live for Live Music, a notorious blog for their click-bait headlines and thus lead to the idea for the Tweet.  It is interesting to see that rather than like the post or share it people actually went to my profile to check it out.

'Cuz they say two thousand zero zero party over, oops out of time. So tonight I'm gonna party like it's 1999 #tweet1999 #prince

While this Tweet really did not serve a particular purpose, it still had engagement from people who saw it.  This Tweet is very simple to explain, it was my 1,999 Tweet.  This style of Tweet is the type of Tweet I would always make before taking this class.  It is these types of Tweets that I feel while although engaged the viewer actually hurt my social media rather than help.

Mother nature knew that #syracuse needed to be blessed with good weather on #NationalStressAwarenessDay, enjoying the sunshine today #NHsmtp

On this day, we had to find trending topics to Tweet about, and I saw the national stress day Tweet trending throughout the US so I decided to try it out.  I think it was perfect timing since around the time of this Tweet we had a day of usually nice weather and sunshine, things that are rare in Syracuse.  I think that the combination of this being a national trend on top of a relatable topic for SU students helped the engagement with this Tweet.

I have no idea what a bummer jam band means, but I will find out #NHsmtp https://t.co/162IPxXQNr

This is the first Tweet on the list that where I actually shared some information outside of my own opinion.  This was at the beginning of the class so my quote Tweet selection did not stray far from my heart.  This Tweet’s engagement benefitted from Prof. Grygiel inquiring to find out more about what the deal was with this group.

If you have a chance, go see #SpotlightMovie, it is the All the President's Men for our generation #NHsmtp #Boston

This is one of my favorites from the semester.  I saw the movie Spotlight twice over Thanksgiving break, and it is essential viewing material for anybody, but especially every single person in this class.  The movie is entirely about breaking a national story just on the cusp of the Internet era and it shows the end of different time in Journalism.  This Tweet was very well timed since the movie was just releasesd, and by using the movie hashtag, I was able to get a like from the Spotlight Twitter page.  It also helped that the class really engaged on this Tweet by liking it, replying and retweeting it.

Thanks to @stgeersyr & @JonpKane #mikeipedia is live so hit me with any random music, film tv and pop culture I'll try to answer #NHsmtp

This Tweet was also a lot of fun.  If I have more things to say, I am definitely going to continue to use this hashtag as a way to distinguish myself.  Considering this assignment was focused on the hashtag, the fact that four people clicked it shows that it was interesting enough to draw some attention to it.  It also helped that Jon and Steve were in on the joke so that made them more interested on top of me tagging them within the post.

It is really cool to see how #Undateable is applying social media to its live broadcasts http://t.co/RW5e8YEtsg #NHsmtp 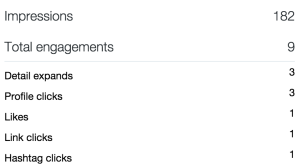 I would like to preface this by saying I like to watch a lot of really bad sitcom TV.  Now that is out of the way, Undateable is an NBC show that took the leap into live broadcasting East and West Coast feeds for the entire 3rd season.  It is amazing to see how they are engaging the audience as well as breaking the fourth wall every chance they get.  I think this Tweet had a high level of engagement since I attached an article to the Tweet as well as using the hashtag of the show.

This is the only Tweet I made this semester using photos, and I really do not have a good explanation for that.  Clearly, using a photo is an amazing way to get engagement, especially since the majority of it on the picture is people actually looking at the photos themselves.  If my band was not ending this semester, I would definitely start a band Twitter and blast it with only professional quality photos, since I think this would lead to greater engagement.

On my way to #NYC for billboard touring conference, hope everybody in cuse has an awesome #thanksgiving ✈️👍🎶🍗 #NHsmtp

As I was on my way to Thanksgiving break and the Billboard conference, I like to let people know and thought maybe somebody else at the conference might see.  Not only until the day later did I found out the hashtag for the event was #TouringConf.  What is really cool about this tweet is that people were aware of the event in the area, so Virgil’s BBQ, right around the corner from the venue, liked my Tweet and I imagine every Tweet mentioning Billboard.  That strategy of finding out what events are in your area and then using that to target people related to it.