Part 1: Influence
At the beginning of the semester, I had 198 Twitter followers. I didn’t go on Twitter that much to scroll through, much less to tweet. When I started writing tweets for this class, I got a better feeling for my “Twitter voice” that used the right language that people would engage with. I found that when you engage with people directly on Twitter, it is easier to increase your influence because they are able to get a better feeling about who you are as opposed to if you just retweeted their content. I noticed that my followers really respond to relatable life jokes and memes, so I did my best throughout the semester to think of the most relatable content that would make someone say, “Damn. I feel that.” When I tried to tweet about serious things like social justice and politics, I noticed those tweets didn’t get as much engagement as the memes did. I believe because of the way I have built my “brand”, people expect my content to be funny rather than political or serious. I also leveraged my network of strong tie people that I knew in real life on Twitter, followed their accounts, and 95% of the time they followed me back, which also helped to grow my influence. This class helped me to leverage my weak ties by allowing me to follow fellow NHsmc’ers in our class to build my network as well.

This post got the least amount of impressions of the top 5 with only 272, but the highest engagement rate of all at 20.6%. We were tasked with creating a Twitter “moment”, which is a collection of tweets that are all centered around one theme. When I made my Twitter moment, people were making memes about Hurricane Karen, which ripped through the Virgin Islands and Puerto Rico. In internet culture, Karen is also a popular name for a mom personality who gets upset easily and “wishes to speak with the manager” about various ridiculous things. The tweet I created to promote the moment received 56 engagements, with 54 of them being link clicks on my URL and two hashtag clicks. The moment itself received 2 likes. I think this tweet had a high engagement rate because I curated a very specific set of tweets about something relevant and funny that people wanted to look at.

@chelseaperetti when will we be graced with your presence on our tech rectangles again? I miss laughing out loud when I watch tv #NHsmc pic.twitter.com/j9SJdCwdNk

This was one of the first assignments we had to do, which was to engage someone who has a great profile on Twitter. I picked Chelsea Peretti not only because I love her on Brooklyn 99, but because she has very raw weird humor on her Twitter page that I enjoy engaging with. Also, because she isn’t a huge celebrity with millions of followers, I thought that I had a better chance of actually reaching her. I decided to ask her when she was coming back to Brooklyn 99 because she had left for a few seasons, and I used a GIF of her character Gina to drive home the point. I made a point to ask her a question instead of giving her a plain compliment because I thought it would stand out more in the pool of people tweeting nonsense at her. Although this post only got 293 impressions, Chelsea favorited my tweet as did Sean and Liz. Sean and Liz also engaged with me by replying to my tweet, which added to the engagement count. The total engagement count ended up at 16, with three likes and two replies factored into that, with a 5.5% engagement rate.

This assignment tasked us with creating a “flow” post, which is a piece of content that might be relevant today, but not in a week. The thing I find most difficult about Twitter is that it is mostly made up of flow content. Meme frames and trending hashtags come and go so quickly that if you don’t come up with something clever fast enough, the trend will leave without you. There are skills to be learned in jumping on a trend quickly and early and also figuring out content that will always be relevant. I monitored trending hashtags in Tweetdeck and found one that was clever and fun: #CollegeinSixWords. I made a meme about how nobody does work during syllabus week in college, which is something that most college students can relate to. This post got 306 impressions, 3 engagements, with a 1.0% engagement rate. I opted to use a gif in this post, which added more rich media for users to engage with as opposed to only text. I think that most of my impressions came from people finding my post under the trending hashtag. This was not one of my more successful posts, but I still gained some impressions.

For this in-class assignment, we had to pick a social justice issue in small groups and put out some tweets about it. We retweeted each others tweets, quote tweeted other tweets with informational statistics, and liked each others tweets as well. This tweet got 347 impressions, with 7 engagements and a 2.0% engagement rate. Most of the engagements came from my group members who retweeted my quote tweet, but I also earned a like from someone in my network who is not in NHsmc. Often times, social justice campaigns on social media will lean towards the thin symbolic side of Ethan Zuckerman’s chart of slacktivism because people will bandwagon on a hashtag to show their support online instead of actually doing something IRL. Something like the #NotAgainSU campaign bends more toward the thick and impactful side because in addition to an overwhelming amount of social content, people were also occupying the Barnes Center in person. It was interesting to dip my toe into the pool of social justice because as I said above, my brand usually leans more towards funny jokes and memes. It was good to step out of my comfort zone and experiment with different types of content. I also used popular hashtags for gun violence prevention in order to get my tweet out there more.

had a blast hanging out with @nickkroll last night!

well, we didn't hang out as much as i sat in a theater and listened to him make jokes about farts and his love life. still a GREAT TIME!!! #MiddleAgedBoyTour #NHsmc

This assignment asked us to schedule a tweet in Tweetdeck based on when our followers were most active. I had just gone to Nick Kroll’s comedy show the night prior, so I thought it would be good and relevant to schedule a tweet about that. This tweet received 2,549 impressions, had 42 engagements, and a 1.6% engagement rate. Although not many of my friends liked it, Nick Kroll himself favorited my tweet and I believe that is where most of the impressions came from. People would have likely scrolled through his “liked” tab to see my tweet there. I also used his hashtag, #MiddleAgedBoyTour in my tweet in the hopes of getting some more engagement from people surfing through that hashtag. I believe this was my most successful #NHsmc Twitter post because I got briefly noticed by a celebrity.

Finally, in this last post I used a VSCO filter and tagged #VSCO in order to engage the VSCO community. I suspect the drop in engagement was due to people getting tired of my blue wig content, so I added in some colored lines to spice up the photo a little bit and make it look more artistic. The VSCO filter that I used really brings out the color in my wig, which is the focal point of the photo. I got 337 likes, 13 comments, and a total of 350 engagements on this photo. These numbers dip more towards the unsuccessful side of my content for reasons aforementioned.

the bean is a real reflection of who I am #nhsmc

For this post I did something that was very out of my comfort zone, which was to use an engaging Instagram pre-loaded filter instead of a VSCO filter. I never use the pre loaded Instagram filters because I feel that they don’t produce the level of vibrancy that I’m looking for in a filter that would make my picture pop. That being said, I used the Clarendon filter because I thought it gave the photos a good amount of contrast. It also helped that the photo was taken outside with natural light. This photo got 347 likes, 9 comments, and a total of 356 engagements. Those numbers are average for me, which means that this post was not super successful or unsuccessful.

For this assignment we had to create a post with a carousel, an Instagram feature that allows you to post multiple photos with a swipe feature. The photos in the carousel were a picture of me and my friend doing two different poses at my sorority’s date night. This photo got 370 likes, 13 comments, and 383 total engagements. I noticed that photos of me with other people or photos without me in them do significantly worse than a solo shot. I also noticed that posting a carousel post did not hinder my engagements, even though I am posting more photos for people to swipe through. Aesthetic is very important on my Instagram, so I made sure that these photos were pleasing to the eye and different enough to warrant a gallery swipe. 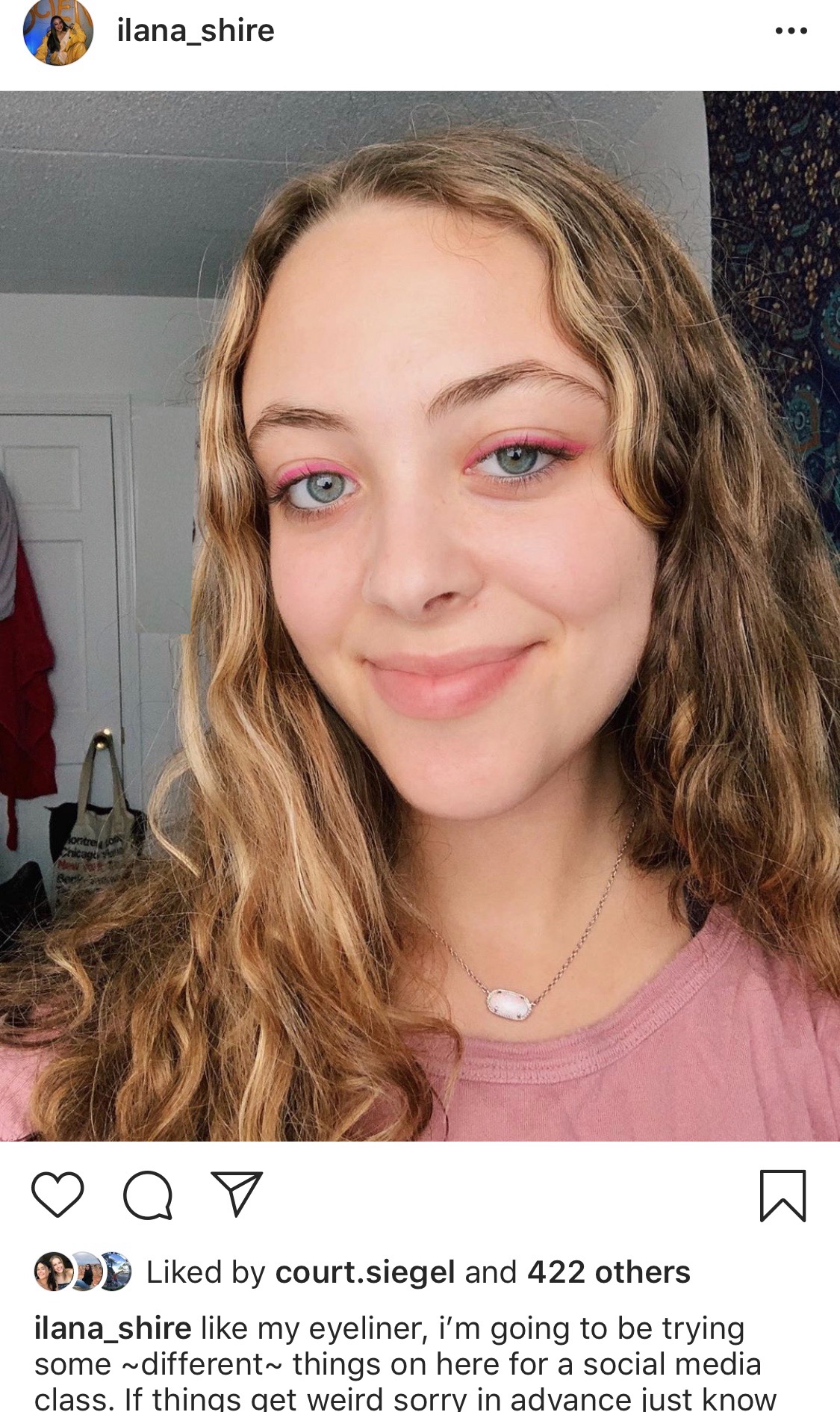 Similarly to the photo above, this post performed very well with 423 likes, 38 comments, and 461 total engagements. Again, I was debuting a makeup look that no one has seen me in before, so people were likely interested in that. In my caption, I notified people that I would be posting some things for a class in order to prep them to see more unusual content on my Instagram. Thankfully, the posts were broad enough that I could fit them to my aesthetic and stay consistent with the type of things I normally post. I think that because I made a note that I was deviating from my normal content, people were more interested in engaging with the photo.

I created this post keeping in mind the type of content that gets the most engagements on my Instagram. I used Squarelovin, an analytics site, to see which posts of mine have the most engagement overall. I noticed that pictures of just me receive the most engagement, but especially when I am wearing something that stands out from the ordinary whether it be makeup or clothing. It was also easy to recreate this type of content because it was Halloween weekend, which is allegedly one of the most Instagrammed days of the year. This photo received 427 likes and 27 comments, coming to a total of 454 total engagements. I think people were engaged with this photo because I did my makeup a special way that people were not used to seeing me wear. I definitely had an advantage using my rinsta for these assignments because I already had a dedicated base of followers who regularly engage with my posts.