Skip to content
Posted on May 2, 2020 by Christina Gelato

My meme reaches at least 100 views on Imgur.

My meme was inspired by two memes that I put together. One meme being the “white people” meme: a blanket generalization statement about silly things white people do. 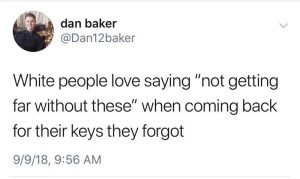 The other the “absolutely/literally no one” meme: this idea that even without a trigger a person or thing will still act in a specific way.

These two were put together in the tweet format in order to create my meme. The tweet format (like both memes above) is a very recognizable format so people know how to read it easily, and instantly know what they are looking at.

My meme was a standard tweet screenshot placed on another platform. There are many Instagram accounts dedicated to this form of meme so I felt this meme had a decent shot of going viral. This meme was topical about the quarantine because of COVD-19, and the surge of people baking bread. I think this meme resonated with those who came across it because almost everyone has heard someone talk about not only making bread but making a sourdough starter. I do believe this meme struggled on Imgur, because of the demographic of people who use this site. Twitter is more of a place where people freely make fun of themselves and recognize the common jokes in society. Imgur does not have the same personality. A few people in the comments of my post made a rebuttal saying “Oh… it’s cool to pick on white people now. Ok.” with a reply of “As long as they aren’t gay, female, trans, handicap, Jewish, balding … actually … Irish straight white males, yes. And Canadians.” The audience of Imgur features more of the “white male” who constantly believes he is being oppressed when in reality he is not. This means that my meme would not go over well with this audience, and it did not.

My meme had 11 down votes and 4 upvotes showing that the meme did not sit well on this website. The post received 474 views as my final engagement number–which is more than my objective–but only 15 people interacted with the meme. This is not a very good ratio. If my tweet was featured on a more popular account on Twitter or Instagram I believe the meme would have gotten a lot better response. Imgur was not the best channel for this kind of humor.

I direct messaged my meme to an Instagram meme account hoping to have it posted, but it was never posted. This was not helpful for the Imgur view count but would have been exciting if it was posted. I then posted the link to a Facebook private meme page, but even though this meme page had a million followers there was not much interaction on each post. The demographic was also similar to those on Imgur so I had very few interactions. Also, a link in a Facebook page from a stranger is not always the most inviting, so I cannot blame people for not clicking on it especially when you can see the entire meme in the frame. Posting the link in my bio on Instagram did not work at all, because I am relying too much on people I know when the idea of a viral meme is to reach people you do not know. Also, people are generally lazy and will not click the link. Lastly, I posted the link in my sorority Facebook page once again hoping to humor people I know. I had a lot of good feedback from them saying it was funny because they are apart of the demographic I was hoping to reach: those who make fun of themselves. However, this only reached a little over 100 people and not everyone actually clicked on the link. Overall, I think I had a very weak plan to promote my meme and should have planned more accordingly.

No one directly made a derivative of my meme considering my meme is already a derivative. I did not invent a new style of meme that was to be copied, so I was not expecting to have any derivatives.

In summary, while my meme was topical and relatable I believe that Imgur was not the best place for this meme to thrive.