Skip to content
Posted on May 2, 2020 by Anonda Hoppner

Throughout the semester,  I learnt a lot about Twitter, Twitter analytics, and ways to be efficient when posting or searching. I definitely feel much more comfortable with Twitter now, and feel I understand it much better. I started a brand new account at the beginning of the semester, with 0 followers. I now have 19 followers, and am following 10.

I found I was most successful when I tweeted things that were relatable to my audience.  For example, my tweets about being a college student were always successful. I knew my audience, I knew who was following me and this was where I had my success. I also learnt a lot about different symbols on my keyboard such as – and ~ and question marks, explanation marks, etc. Before this class, I never really used any punctuation, and I learnt quickly that it is really helpful as it adds tone, and guidance for how you want the tweet to be read. The use of emojis was also something that really helped me. I tried to never force them, but if one came to my mind when writing the tweet, I would use it.

I think  if I had went out of my way to engage with more people that do not follow me, I would have been more successful. I stayed on my Home page a lot, which held me back from engaging with new content, and new people. I think I also did not use enough hashtags, especially for a new account. I think that if I had used more hashtags and done research on which are popular or trending, I would have reached more people.

Overall, despite only having gained 19 followers, I learnt a lot about Twitter, as well as other social medias, and how to use them affectively and efficiently. Tweetdeck and Twitter Analysis were new platforms that I now use all the time, and find so helpful. 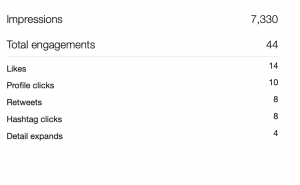 This was a quote tweet about the #NotAgainSU protest that was going on on campus this past semester. The tweet that I quoted was dark, and stern. Therefore, my tone in the quote was intended to be stern and serious, however hopeful at the same time. I think people respected and related to my response, and so I  received 14 likes as a reflection of their respect. I got 10 profile clicks, probably because I  am an SU student speaking on an SU matter. People who see this tweet that go too or work at SU would want to click on me profile and find out who I am. 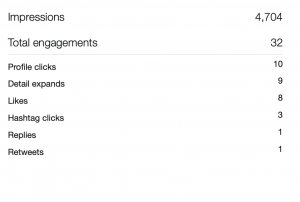 This tweet was at a Super Bowl commercial.  It was a quote tweet of a meme of someone trying to figure out a math problem with the caption “trying to determine who the commercial is for”. I quoted it by saying #AvocadosFromMexico because it was extremely confusing, however hilarious. I had a feeling that commercial would be a fan favourite, and I sent the tweet out moments after the commercial aired. Anytime you tweet about commercials or the halftime show during the Super Bowl, you are most likely going to get engagement. I think most people had the same reaction to the avocado commercial that I did, and that is why this tweet was successful. 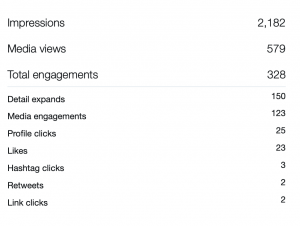 This tweet was a video of my team playing a post practice shooting game that we always love to play. I used the hashtag #humpday, which is a really popular hashtag. I also tagged @CuseIce which is our team twitter account, so when I received engagement from them, I got the tweet around. I think people also like to see behind the scenes of college sports, that kind of stuff usually will get a good amount of engagement. 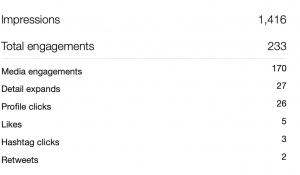 This tweet was successful because it had a very precise target audience, which was college students who love coffee. I got a lot of engagement from new people (college students). The hashtag, #coffeeholic is a popular one, and people who believe they are “coffeeholics” will want to engage with this kind of content.

This was another Super Bowl tweet. I used the hashtag #SuperBowlHalftimeShow, which I’m sure helped me out a  lot. As I said, if you are tweeting about a Super Bowl matter during, you will most likely receive engagement. I also used some emojis to enhance the #girlpower part of the tweet. When JLo brought her daughter on stage, it was a really inspiring moment and so I think the #girlpower made people want to engage.

This tweet was made to promote my blog on memes. I think what worked with this tweet was how it was written. It looks simple and boring but there is actually a lot to it. It starts off with a call to action, “calling all meme lovers!” Most people do love memes, so this grabs their attention.  Next, the way I used “-” and incorporated the title of the blog, made it easy and attractive for people to read. 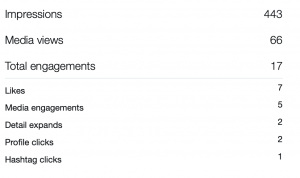 This tweet was a meme that I created. I used the hashtags #bieber and #yummy which I think got attention because I created this meme very shortly after his music video for”Yummy” was released. I think my caption was clever too, as it would be relatable and funny to most college students.

This tweet was also a meme that I created. It was about being home from school because of COVID-19, and missing out on senior spring activities. This tweet was very relatable to many college students, which I think is the main reason it got good engagement. The hashtag #coronaquaratine was also trending at the time, so using that hashtag was affective. 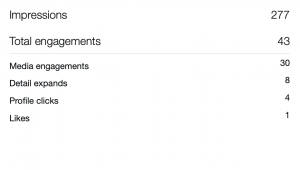 This tweet was a cross promotion for my Instagram account. I received 4 profile clicks, which is good and probably means people wanted to check out my Twitter account before deciding whether or not they wanted to look at my Instagram account. I used the hashtag #instagood which is a really popular and trending hashtag for Instagram. The tone in my caption is friendly, and inviting. With the use of the emoji, and how I speak to the audience makes people feel like they can connect with me on social media and I will be happy to connect back.

This was a tweet of a twitter analytic I researched to see the difference in popularity/usage between Tik Tok and Instagram. At this time, Tik Tok was becoming very popular, and everyone was talking about it. So, I was curious to see if it had come close to beating Instagram. Since Tik Tok was so popular at this time, I think that my research was interesting to people. Also, when I wrote “taking over the internet” in quotations, it added some attitude to the tone, as it was a reflection of how much it had been thrown in our face at the time.