Skip to content
Posted on October 27, 2019 by Rachel Jacobs

On September 25th, The Wall Street Journal released a story written by an unknown person who works closely with the White House about the transaction between Donald Trump and the Ukrainian government. The complaint goes into depth about the illegal activity that President Trump and the government covered up when Trump allegedly asked the Ukrainian government to investigate Joe Biden. Because of this media story, the activity on Twitter surrounding the topic rose dramatically in the morning of the 25th compared to the days before. 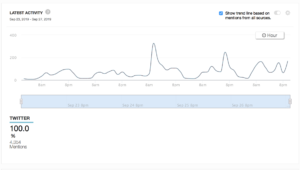 To analyze the trending topics on September 26th, 2019, we used a Boolean Search of (“#WhistleBlowerComplaint”) AND (“WhistleBlower” OR “Trump”) AND NOT (“Donald”). This boolean helped refine the tweets that would be found.

The geographical range for the #WhistleBlowerComplaint was 92.3% centered in the United States which makes sense because a U.S. intelligence agent launched the complaint and angered many Americans causing them to tweet their feelings about it. 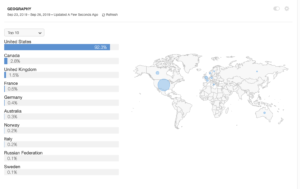 The word cloud features words like impeach Trump, transcript and foreign governments. Many Americans have been unhappy since Trump was elected President and the WhistleBlower claims the government hid the call transcript with the foreign government, they believe this is grounds for impeachment.

The buzz graph starts with the word “Trump” and is connected to words like impeach Trump, questions, and transcript. These words all stem from President Trump and are connected to the secrecy of the administration 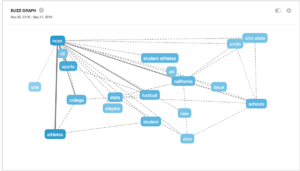 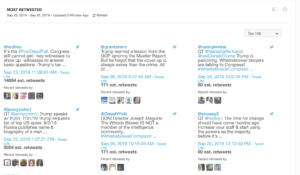 It's the #FirstDayofFall. Congress still cannot get:

We have not held a single Administration official accountable. Time to use our powers of #InherentContempt.

As the story unfolds, it will be interesting to see if the real WhistleBlower will reveal themselves.